Check this out.  Unbelievable, really, though it is kind of what our ensembles have been telling us would happen.  These outputs of jet stream location shown below are but 6 h apart, and that’s what makes this comparison so remarkable; they are so drastically different (check how the orange colors have moved around, and then say, “Oh, my gosh!!”):

The question now is which one is right?

The answer, of course, is NEITHER ONE!

They’re both a little crazy because  exact forecast maps like this for 300 h (13-15 days) can never be relied on exactly.

But, here’s where we fall back on our ensembles (spaghetti plots) to help us figure out which one is CLOSER to the truth; that’s the best we can do.  Sometimes those plots aren’t helpful; there’s too much noise in the pattern around the world, so the spaghetti plots don’t converge to a pattern in which you can have confidence in.

So, here’s the ensemble (spaghetti) plot from last evening’s global data where the model computer model is started with tiny errors, ones that make no difference in the first few days of the model run, but then due to those, the repeated runs with slightly different errors start diverging, sometimes ending up looking like a ball of yarn.  Its where these model runs produce the same result that we have confidence in a forecast as far out 10-15 days.  In the plot below, the constricted contours in east Asia and across most of the Pacific, represents high confidence in where the jet stream will be in 14 days.  The left turn to AK and a big hump off the West Coast is also almost surely the pattern that will be in place as well, as is the dive in the jet into the Plains States.  Thus, a pattern of warm and wet in Alaska, and cold east of the Rockies is a VERY good bet at the time of this plot.

The plot below is tilting toward a trough here, which would mean rain/snow chances along with below average temperatures.  This, by the way, is the OPPOSITE of what the ACTUAL model runs have been telling us would happen for the past two to three days (as was the subject of a somewhat comprehensible blogulation just yesterday here).  Sadly, though, the ensembles were off in their strong suggestion of a trough here, starting in late January and continuing into early February.  So, we’ve lost a little of the precip expected when that pattern faded.

What about panel 2 above, which suggests a major storm for Arizona?

Its almost certainly a bogus outlier;  its not supported.  Its not impossible, but you wouldn’t make a forecast on that pattern.  Most likely our trough pattern will, from another interpretation of the ensembles, be farther inland from the coast, which would mean colder and not as much precip as would be suggested in panel 2.   But its pretty certain that its not going to be hot and dry, a computer solution that’s been roundly rejected from this keyboard all along.

No clouds; no photos.

How about a pilot weather joke instead?  Fits with the models joking us around I think: 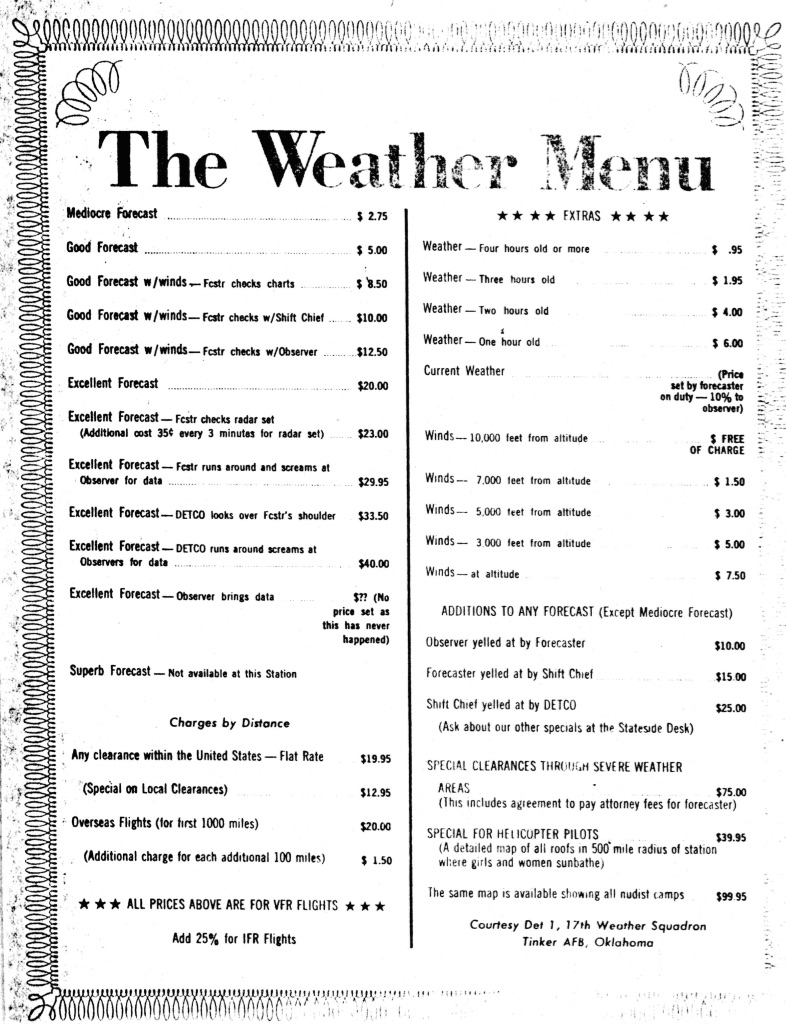