No NWS sounding from the U of AZ Weather Department yesterday afternoon, so’s we can’t really tell with solid data what the temperatures of yesterday’s frosty clouds were.

However, with a max here in the Heights of Sutherland of 71°F, and with a dry adiabatic lapse rate to the bottoms of the clouds (as is always the case on sunny afternoons with Cu), if we estimate how high the bottoms were with any accuracy we can get that bottom temperature.

You already know as a well-developed cloud maven person that they were WELL below freezing which could see by noticing how far the snow virga extended below the bases of the Cumulus, at least 3,000 feet.  and more from the larger clouds later on.   So we have something,

Let’s say bases were at 14,000 feet above the ground over Catalinaland–they were way above Ms. Mt. Lemmon at 9,000 feet which you could probably tell.  That would make the bases at about 16,000 to 17,000 feet above sea level in the free air, pretty darn high above us.

Later analysis and the next morning’s NWS sounding from the U of AZ suggests that bases were closer to -10°C because they were not as high as CMP estimated.  Rather they were closer to 12,000 feet ASL.  Tops would not be quite as cold, too, more like -25° C and colder in the deeper clouds, plenty cold enough for ice in even the small clouds, and for the long snow virga trails.

Below, some samples of Frosty the Cumulus (Cumuli, plural):

Not much ahead now.  Maybe a few more frosty Cu will form today… before things dry out and heat up. 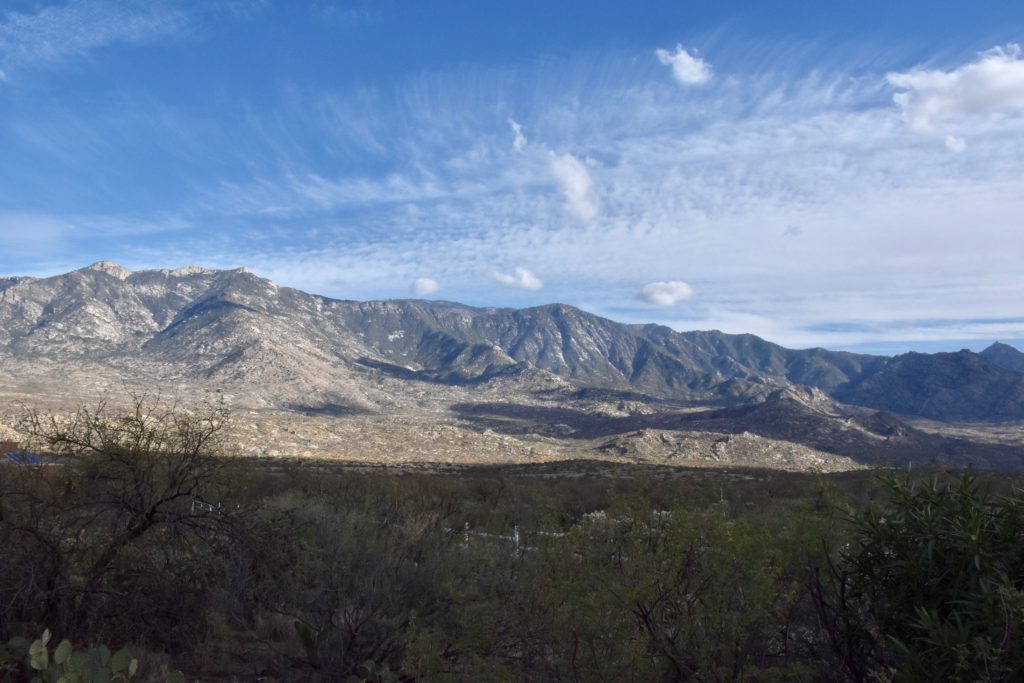 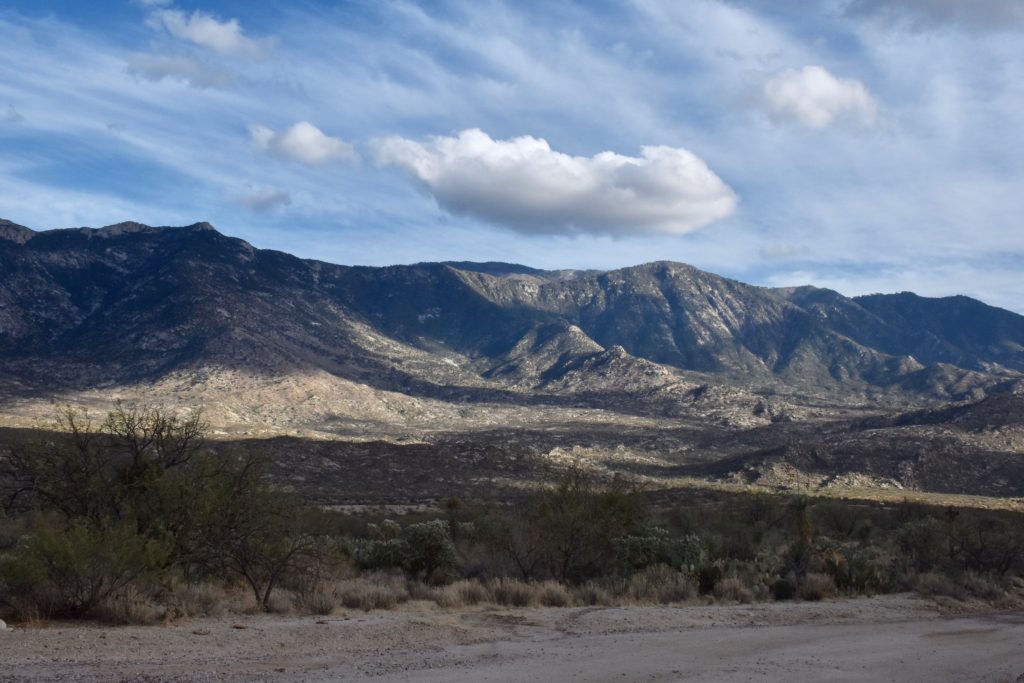 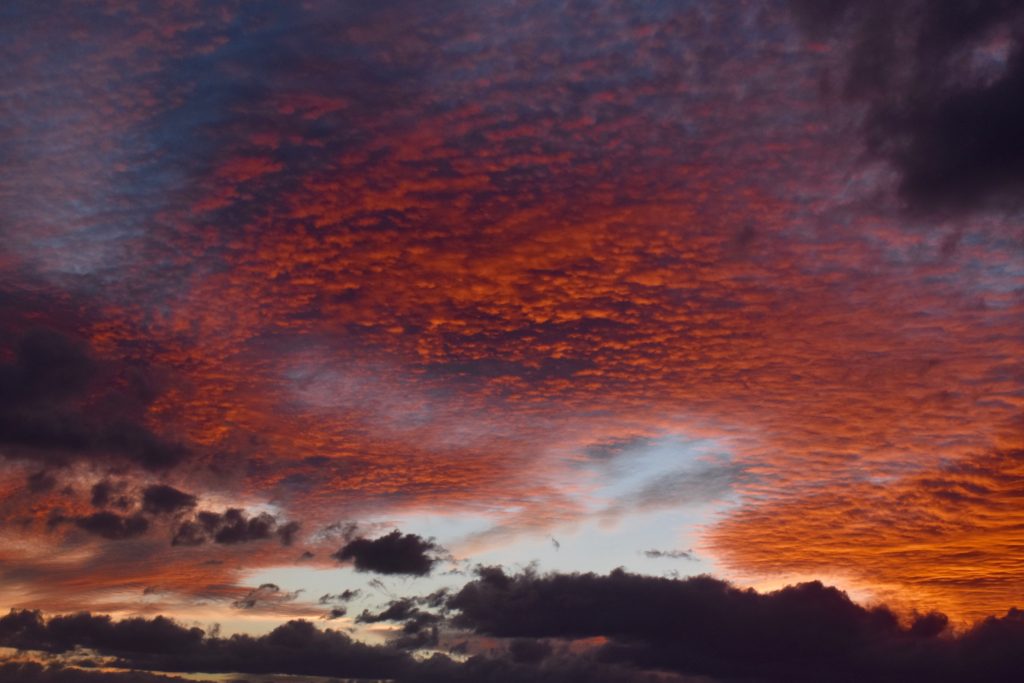 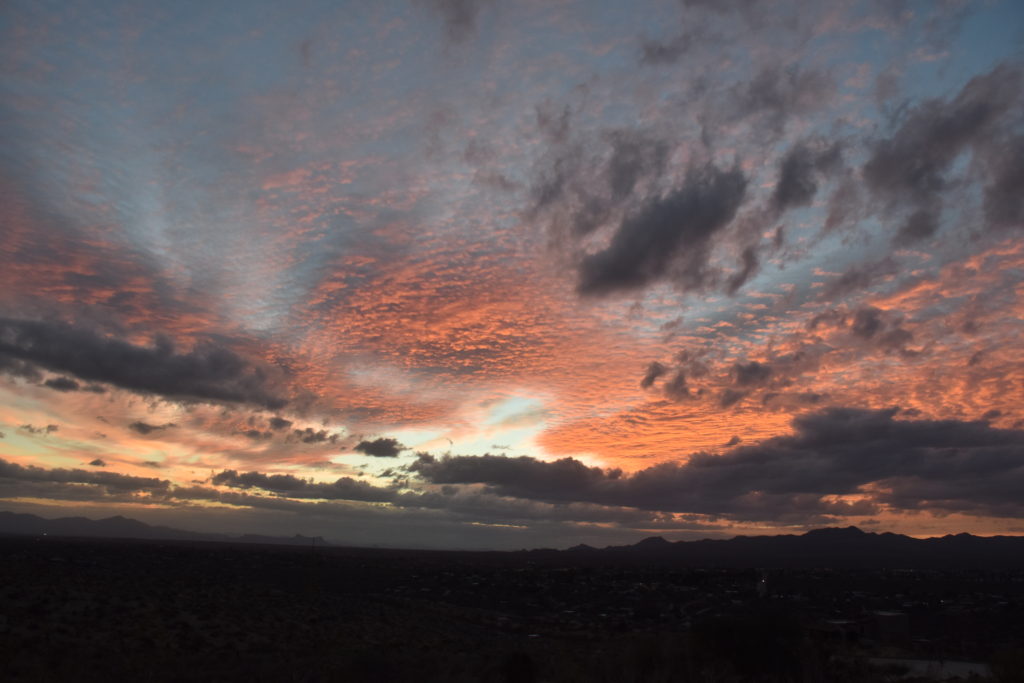 We often have phony dramatizations suggested by titles with exclamation marks, and frankly, today is no exception.   I do like Cirrus, though.  Hope you do, too.

They provide a lot of nice sunrises and sunsets.  EOM.

Yesterday’s displays of Cirrus, ending with a scruff of Cumulus toward Pusch Ridge: 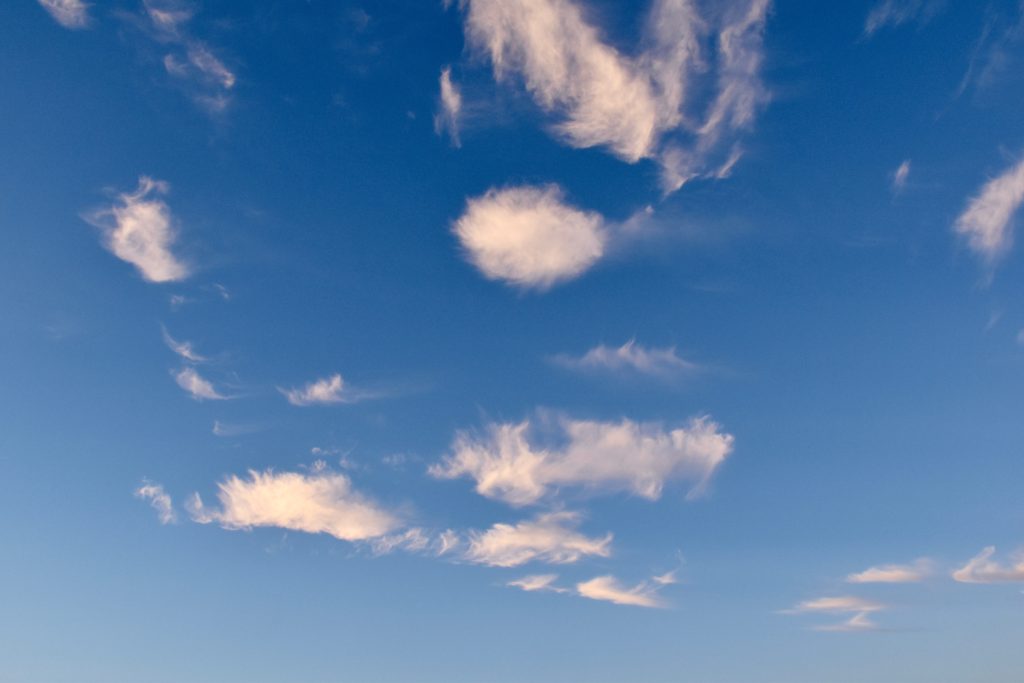 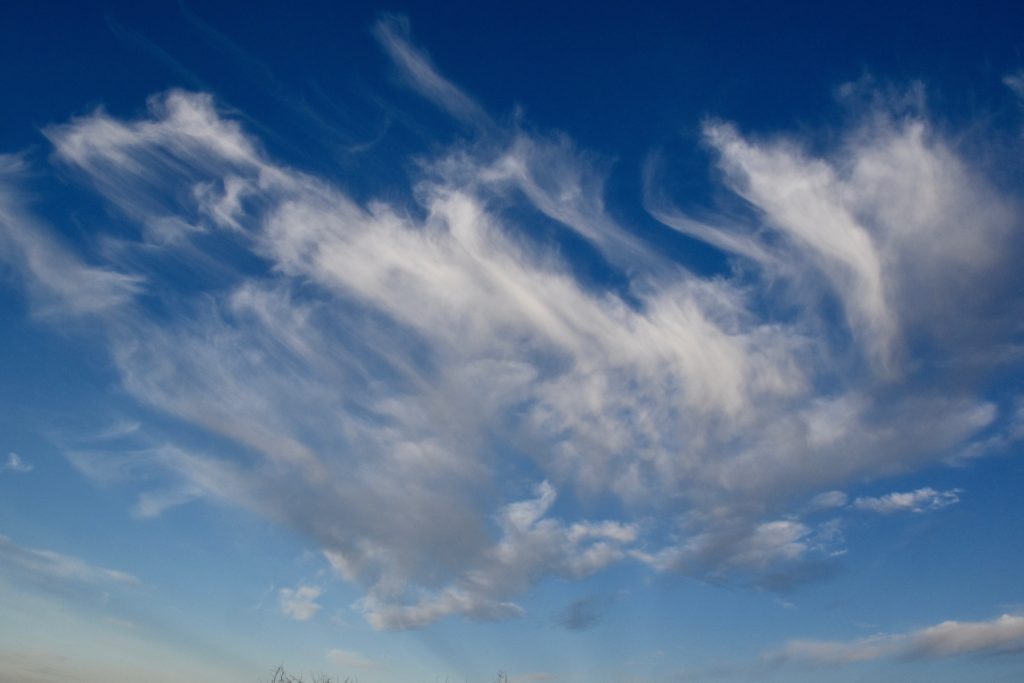 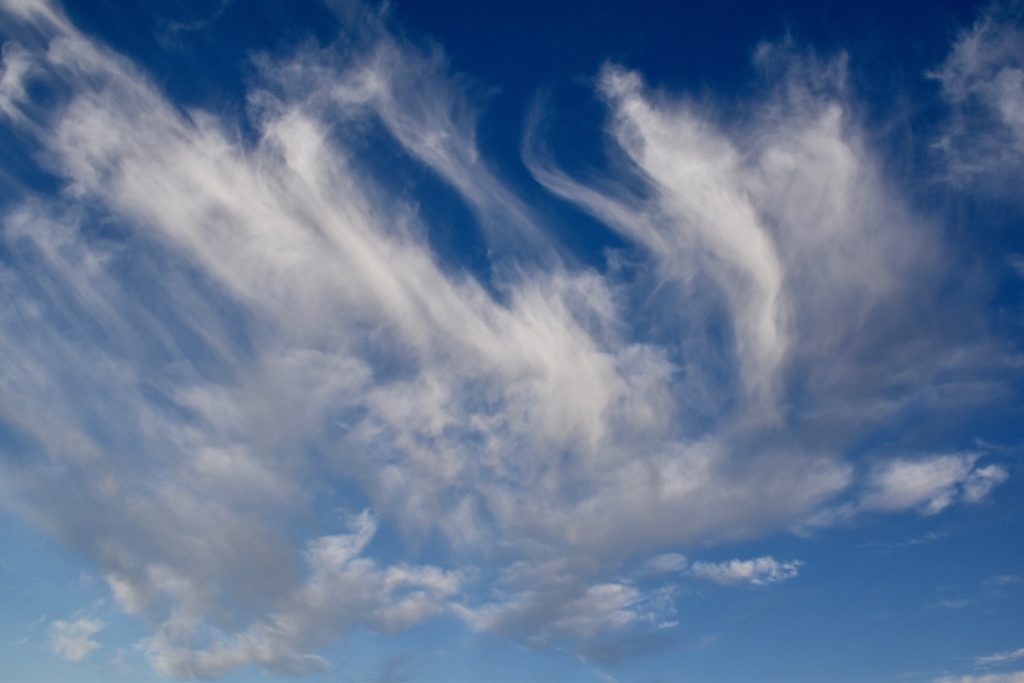 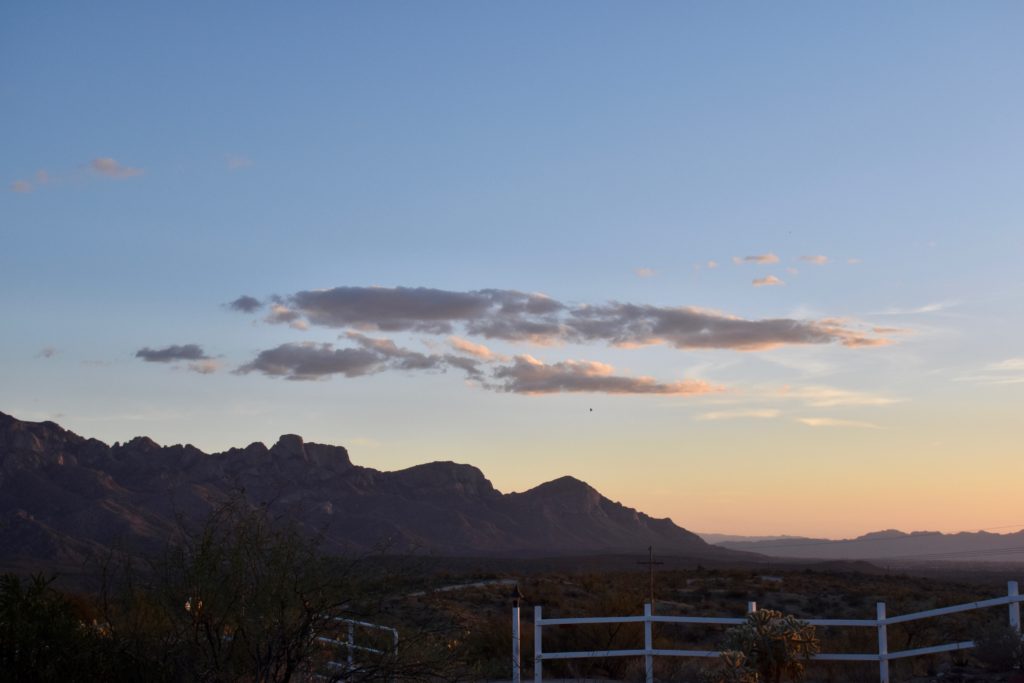 Rain’s on the doorstep!

As here,  just to reinforce that assertion a bit.  Its a link to a recent blog by my cloud-obsessed friend and author, Maria Mudd Ruth.  I strongly recommend buying a few of her books.  Really,  I do!

But in viewing our deep blue skies, pocked with little fluffy Cumulus clouds over the past two or three days, you would not need convincing that even tiny clouds are beguiling, a wonderful attribute for a planet to have.  Having mountains on a planet is great, too, and watching the interplay of clouds and their shadows on them is a never ending pleasure.  We’re pretty lucky when you think about it to be on a planet like this one.  Hope you think so, too.

No rain ahead, glumly, though some sprinkles are out there this morning as frontal cloud band passes over.  Just a little too high off the ground for real rain.  And the cloud tops aren’t quite cold enough to form much ice, too.  Those cloud tops get colder going to the NE, and so higher terrain up thataway (e.g., Show Low) are getting some light rain this morning.  Right now, there’s a little sprinkle just beyond Romero Canyon, so we got a little ice this morning in them clouds.

What was interesting is that I never saw no ice yesterday, to continue the slang of rock and roll, in another cheap attempt to reach out to another demographic.   The clouds were just a bit too warm for ice-formation, tops running in the -4°C to -5°C range according to yesterday afternoon’s Banner University of Arizona’s balloon sounding.  Some may have bulged up to nearly -10°C, but still not quite there.  I looked constantly for signs of ice and never saw none, and neither did you, of course.

In summary, yes, there are some fairly rare times you can get some precip out of clouds by seeding them and yesterday was one of them1.

Today the clouds are thicker, drop sizes therefore larger in those tops of a cloud band similar to the one we had yesterday evening.  As drop sizes increase, the temperature at which they freeze also increases.  Well, at least that’s what we found over and over again at the U of Washington.

Here are some cloud shots from the past couple of days.  Should be some more great scenes today:

Due to time constraints, we now move ahead in the action.  Well, its not really “action” is it?

Well, not that much, just a day ahead….

Moving ahead to yesterday and the day long cloud band….

1Allusions to “Deteriorata” by The National Lampoon Theater.

Oh, well.  When you’re sloppy and asleep at the wheel, think you know more that you really do, that’s what happens, “weather surprises” that shouldn’t be.

But, what a gorgeous day again!  Really, with the smoky skies gone I am so appreciating a blue sky pocked with Cumulus and Cumulonimbus clouds!

Lettuce reprise yesterday in all its unexpected glory:

Since I was clueless yesterday, will remain quiet about today’s weather, though we do have low level moisture around as clouds are again topping the Cat Mountains.

We’ll still get into some early winter like weather in only a week–that’s pretty much in the bag.  Probably no rain, though, just a bit of a very windy day or two and very cold air for the time of year plopping over us.  Our TEEVEE weather folks are surely all over this!

It was quite a surprise to this observer who claims to be a “cloud maven”, but whose credentials must be questioned, even if I do say so myself.  Was thinking plain old small to moderate Cu, hold the ice.

But in a long cloud street, appearing to emanate from Kitt Peak, some ice started to show up in the cloud row upwind of us.  Wonder if you saw it?  The first ice happened around 3:45 PM, followed by a couple drops at 3:59 PM.    Well, as Rob Reiner might say, enough of my yammering, lets get on with the cloudumentary:

Enough lower level moisture for Cumulus again today, but even smaller ones than yesterday.  Since the wind is already noticeable now at 6:26 AM, better mention that we could have noticeable winds again today.  (Much windier yesterday than anticipated by CMP; wind was not on my radar if wind could be seen by radar (well, of course it can when they are raindrops or bugs. Hah!)

Big intrusion of unusually cold air still coming into the West in about a week.  Some of that will reach right here in Catalina really giving the sense that its truly football season.

Last call for Cumulus clouds today, maybe a distant Cumulonimbus top off to the north.  Then one of those long clear and dry spells of fall gets underway….

First, I will shamelessly plug a book on clouds, “A Sideways Look at Clouds”,  by a well-published and acclaimed author friend, Maria Mudd Ruth.   Its about her odyssey into them,  mentally and physically,  after she realized they were something she really had not paid much attention to before mid-life,  then she had to know EVERYTHING about them!  Its a great read, infused here and there with humorous anecdotes.

You can sample the contents here.

Now, on to Catalina’s  clouds and weather…

Not that there have been that many rainstorms since the end of July.

But it would seem that today marks the meteorological end of the summer rain season as dry westerly winds sweep our remaining tropical air to the east today.  The mods think there is a chance for a couple of high-based thunderstorms in the area around Catalina late in the day.  But bases will be so high that not a lot of rain will reach the ground even if one passes right over us.  And, they’ll be moving in from the SW or W today due to encroaching westerlies.

In a little over a week, too, you’ll be hearing about early snow in the Rockies and West!  We’ll have a day or two of those gusty, dry southwest winds that accompany our winter storms as well.  You’ll get a real feel for the season change then.