Yesterday, after I finally saw the model run based on global data from 5 AM AST  for Feb 6th, CMP (the writer) was gloating that bit.  The troughy, cold spaghetti for AZ, that which had been excitedly written about yesterday,  was being confirmed; the interpretation right on, it seemed.  Why even look at more model outputs until later January, I thought.
Then,  just now in the pre-dawn darkness, I examined the computer outputs from last night’s 5 PM AST global data, also for Feb 6th, 5 PM AST.    That is, global data crunched just 12 h later than the first panel I was gloating over, feeling really great about.
But, a completely, ghastly different weather regime had popped out!
How could this be?  We don’t know.   Relatively small changes would be expected, but the model outputs should gravitate back to where spaghetti placed the high and lows aloft.  But this change was ridiculous, and must be rejected.
Some people, like neighbor and big professor “emeritius” of meteorology at Colo State U,  Bill Cotton, refer to such differences as “delta model”.    “Hence”, if that word is still used, today’s title.
(For snowbirds who have just moved to Arizona, the maps below have been annotated to show where you are relative to the rest of the US).

Yikes!
The first regime is cold, maybe some snow down in Catalina at some point about this time (early Feb),  whilst the 2nd regime for the same time is suggests warm conditions, and definitely dry;  no rain nowhere.
CMP (the writer) spoke of a high probability, based on ensemble spaghetti, of cold and lots of precip chances here in Catalinaland beginning at the end of January through the first week of February  So, what’s up with that, this dichotomy?
Moving on to a new topic, let us look at last evening’s sunset rather than ponder what happened to the weather computer model, that is, which panel  above is  likely correct1: 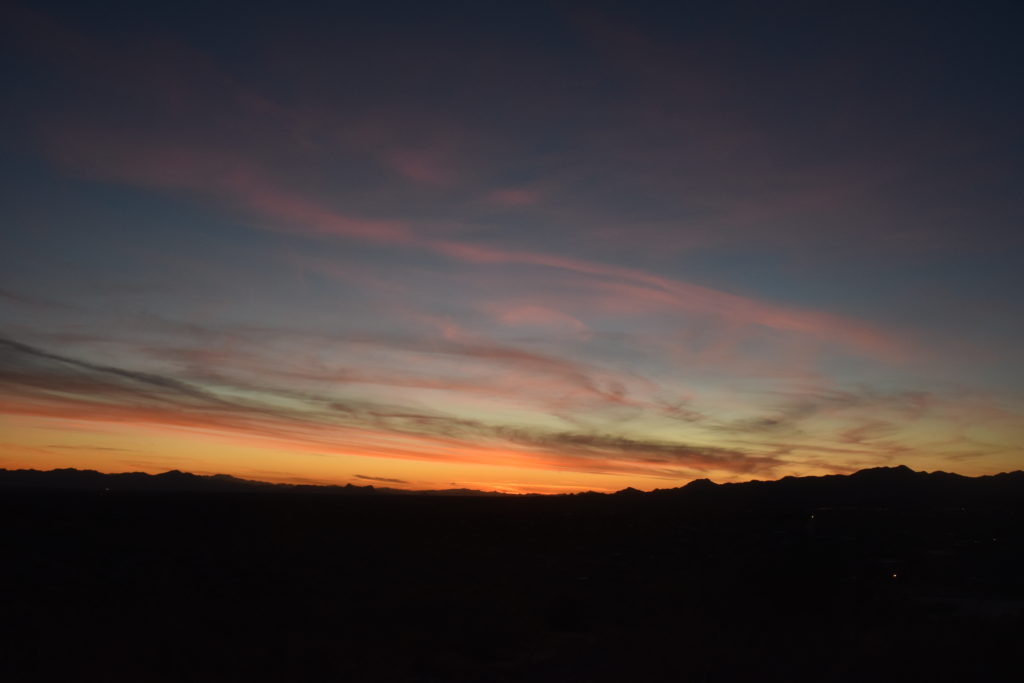 1The first regime above, the troughy, cold one, is strongly supported by ensemble outputs whose crazy-looking output plots are fondly referred to as “spaghetti”.  The second panel served up from just last night’s 5 PM AST global data is not.
Have not looked at last night’s ensembles, but will ignore the bottom run anyway;  will not panic as weaker elements might, that is, change my overall interpretation of troughy conditions in late Jan, early Feb., that is#2, reverse course now, predict drought and warmth  for early Feb. , that is#3, “yo-yo”, as forecasters describe reversing course, confuse the public, lose credibility, where are my pills?
……yet. :}.
Still, “egad re this delta model”,  as Bill likes to say.  Its astounding!  A total joke!  The later one to be totally and completely rejected!
In no way did I expect to see what’s in the bottom panel, which is now above here!  Trying to not panic real hard.  (more kidding)
Still, how can there be an outlier of that magnitude as we see from last night?  Must be a real bad error somewhere (maybe 2 kts of wind, 1.5 deg in temperature, wind direction, 5 decameters in geopotential height, etc), not an itty-bitty error as ensembles start with.  Maybe Russian2 hackers did something, the North Koreans, or the Chinese?  Just kidding
with weather noise and pseudo-paranoia, your Catalina cloud-maven of sorts.
Speaking of Russia,  my great-grandparents emigrated from the Ukraine, here’s the cover of my latest book, published a few years ago.  Well, its not my book per sé, but all the cloud photos in it are mine!  How great izzat?